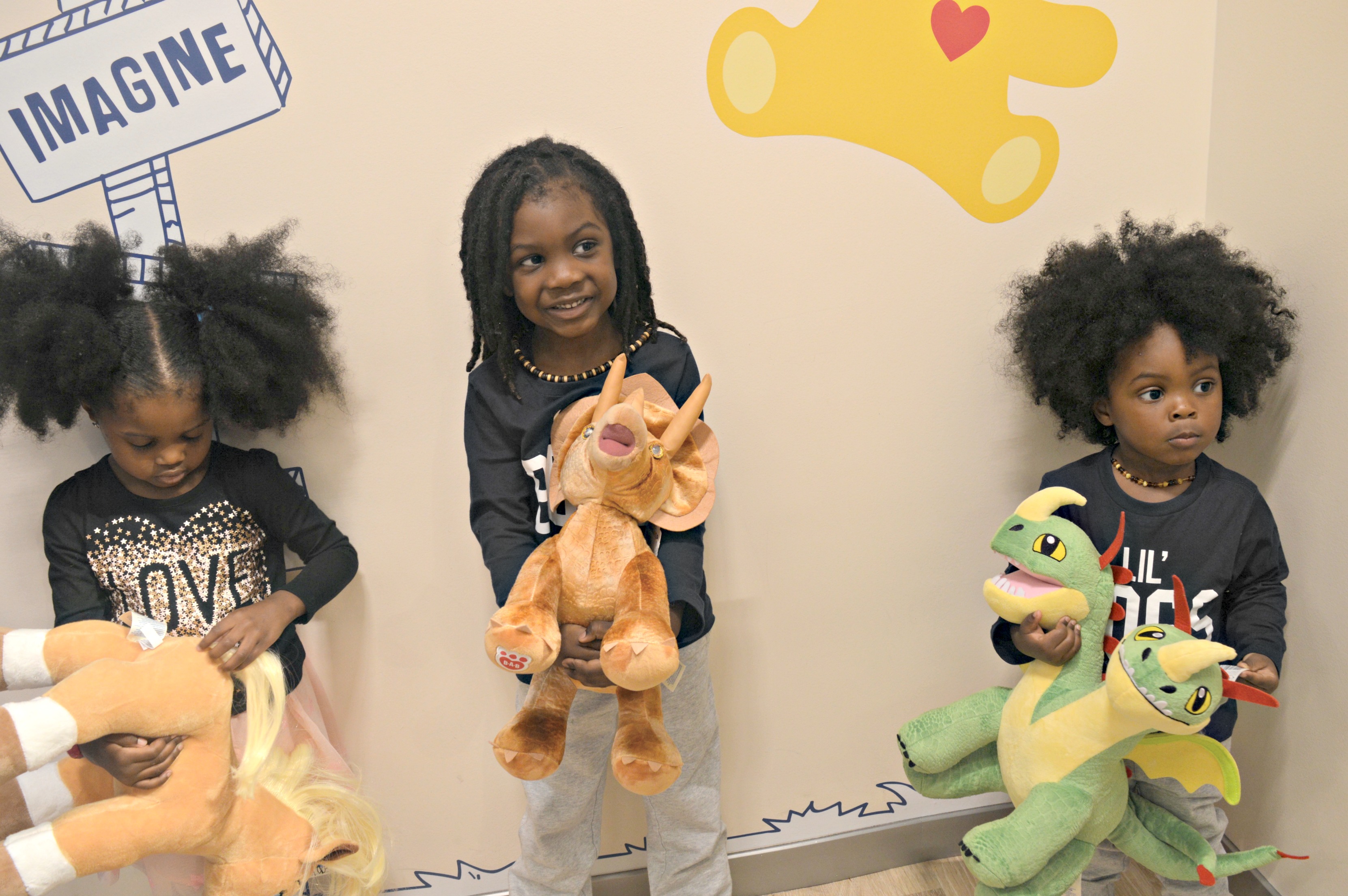 By: Tata
In: Uncategorized
Tagged: Build A Bear
With: 0 Comments

Build-A-Bear is my spot, before our impromptu trip there last week my husband or my kids had never been. When we’d pass by Build-A-Bear their eyes would light up. They thought I was keeping them from a magical teddy bear world so I teamed up with Build-A-Bear so that the kids (and Brown Sugar) could find out what all the hype was about. I’ve been to Build-A-Bear several times, even as an adult but this was before I had my kids, so I knew what to expect, and I was just as or maybe even more excited than them to make some memories. 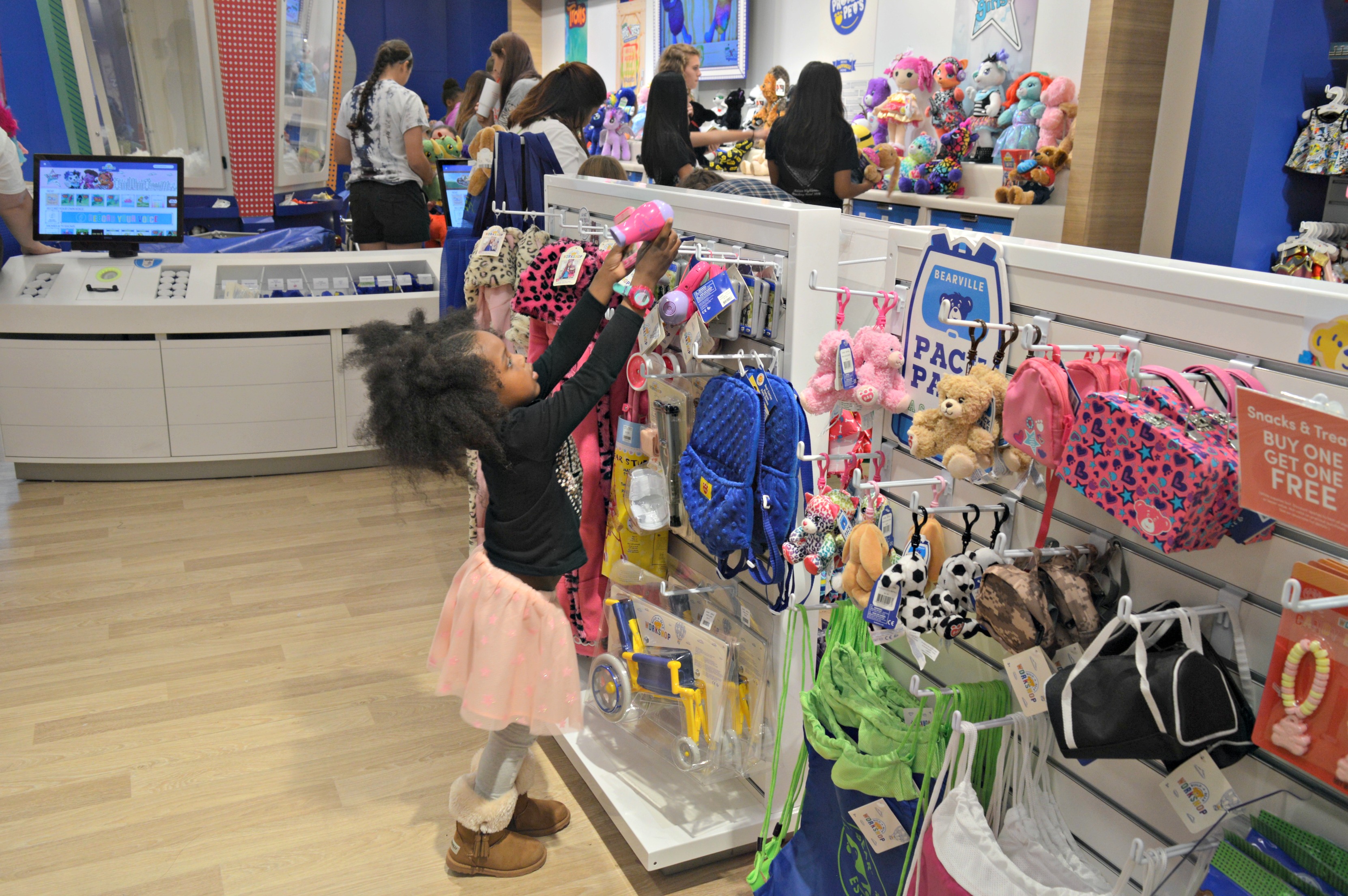 We hit up Lynnhaven mall where we took a couple of snaps in the halls and headed to Build-A-Bear. You may notice that Vayda looks a little eclectic in these pictures and that’s because she has been dressing herself for the past month. I haven’t been able to successfully convince her to wear the clothes I have laid out for her, so I’ve decided just to go with it. 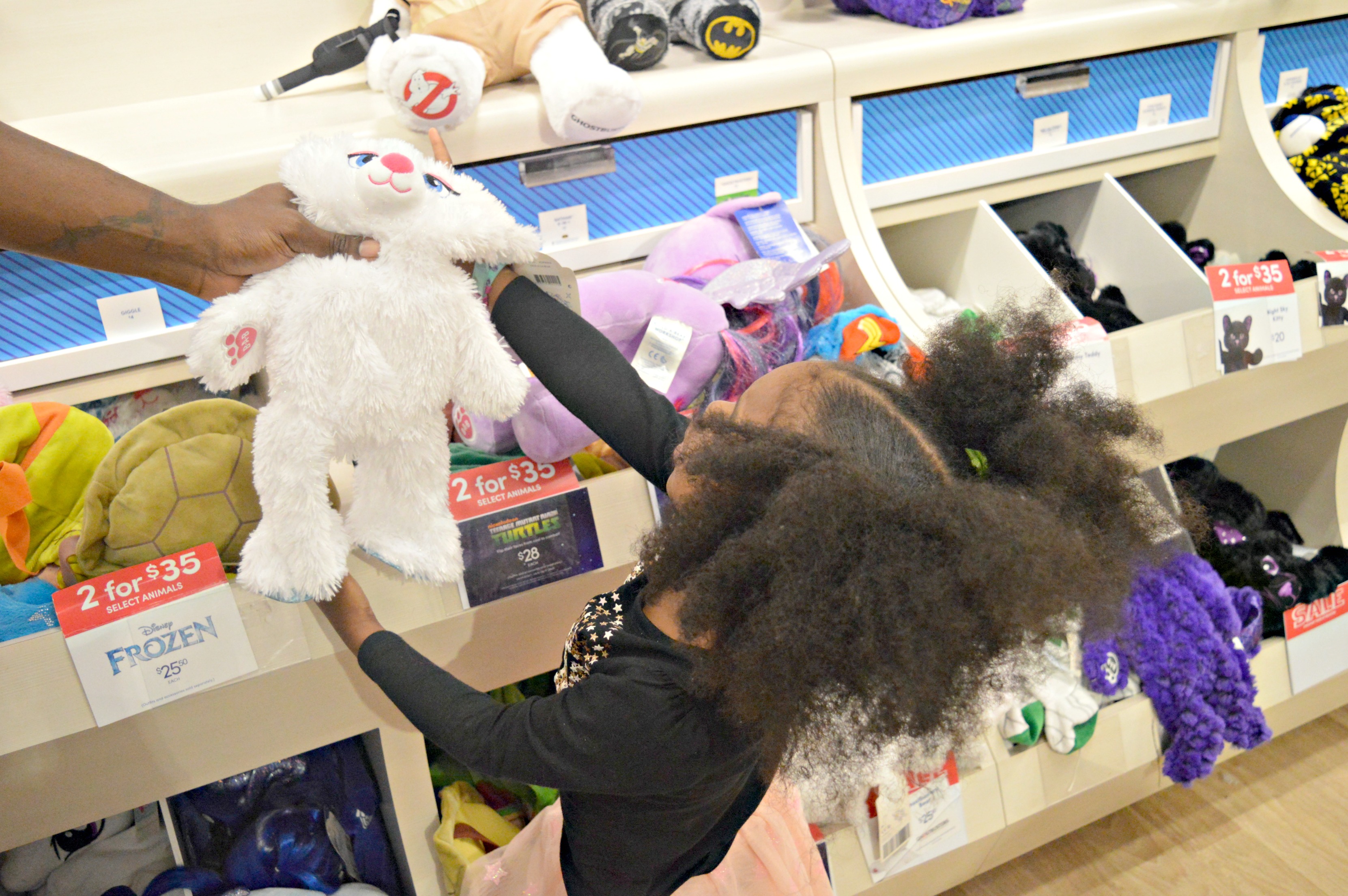 The kid’s started by picking out their “bear skin” that’s what they called it. Zion and Zaniel had a tough time deciding which one they wanted, but Vayda was dead set on getting the exact same bear that my mom bought her for Christmas last year. After explaining to her that she had that one already, I was finally able to convince her to choose something else, and she went with a cute horse that she ended up naming “PonyTail Horsey.” 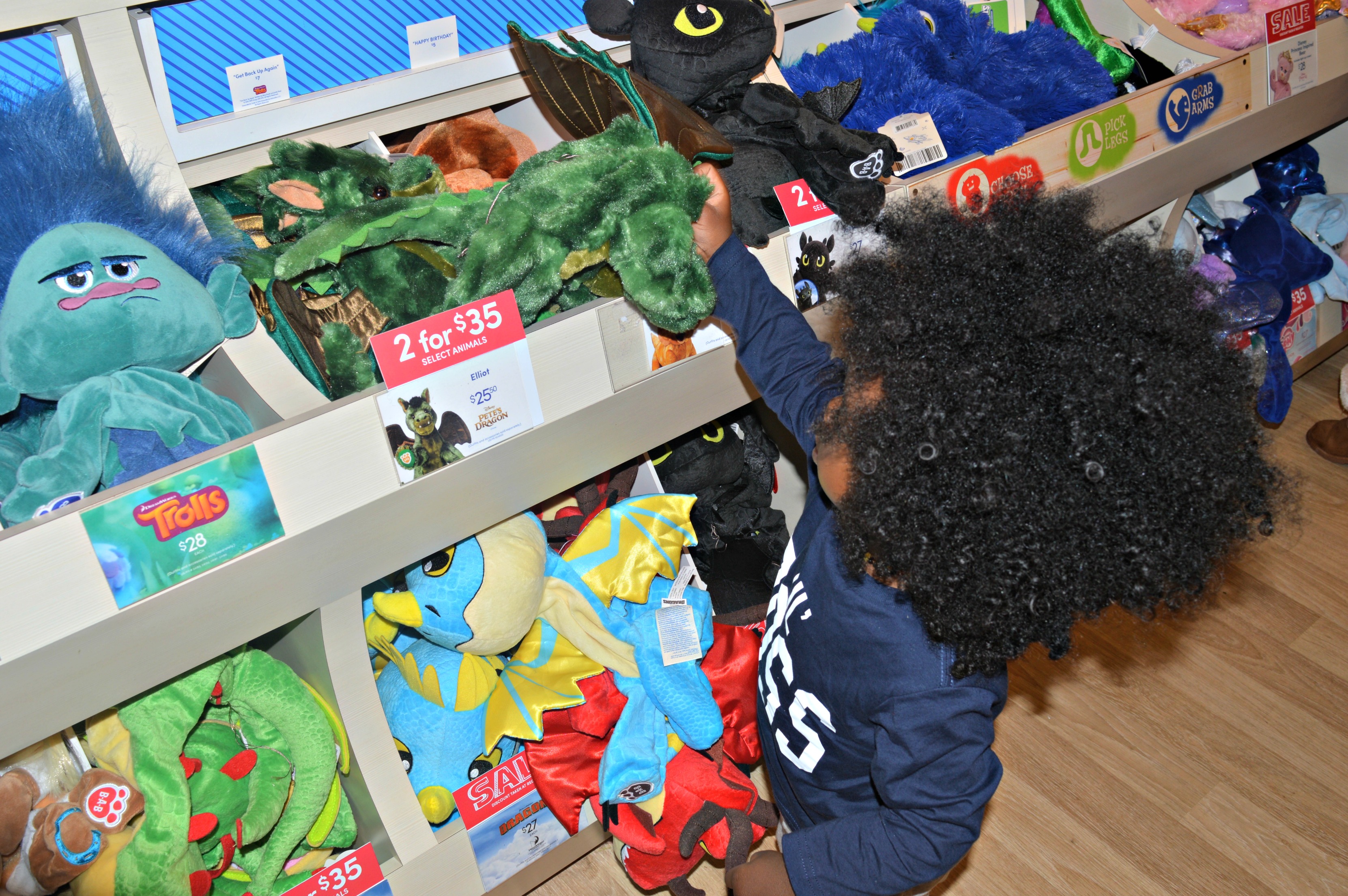 Since it was their first time, I asked that they be given a small tour so that they understood the process and that made things a lot easier and much less hectic. 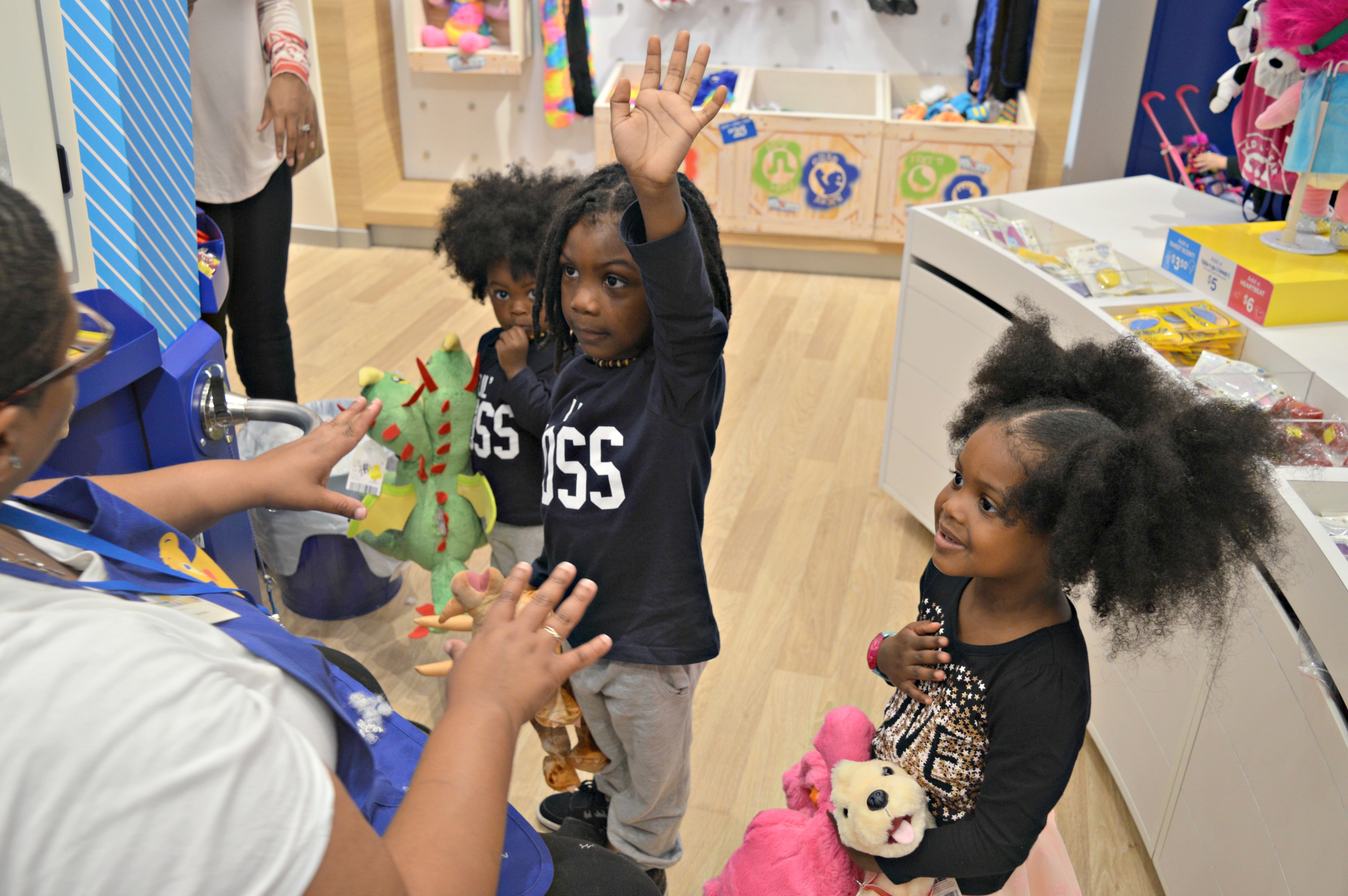 Zaniel is into all things dragons and dinosaurs; I think that started after we saw Pete’s Dragon so I wasn’t surprised that he chose a two headed Dragon. Zion who always looks unimpressed –he gets that from his dad picked a Triceratops, which he ended up naming just that. 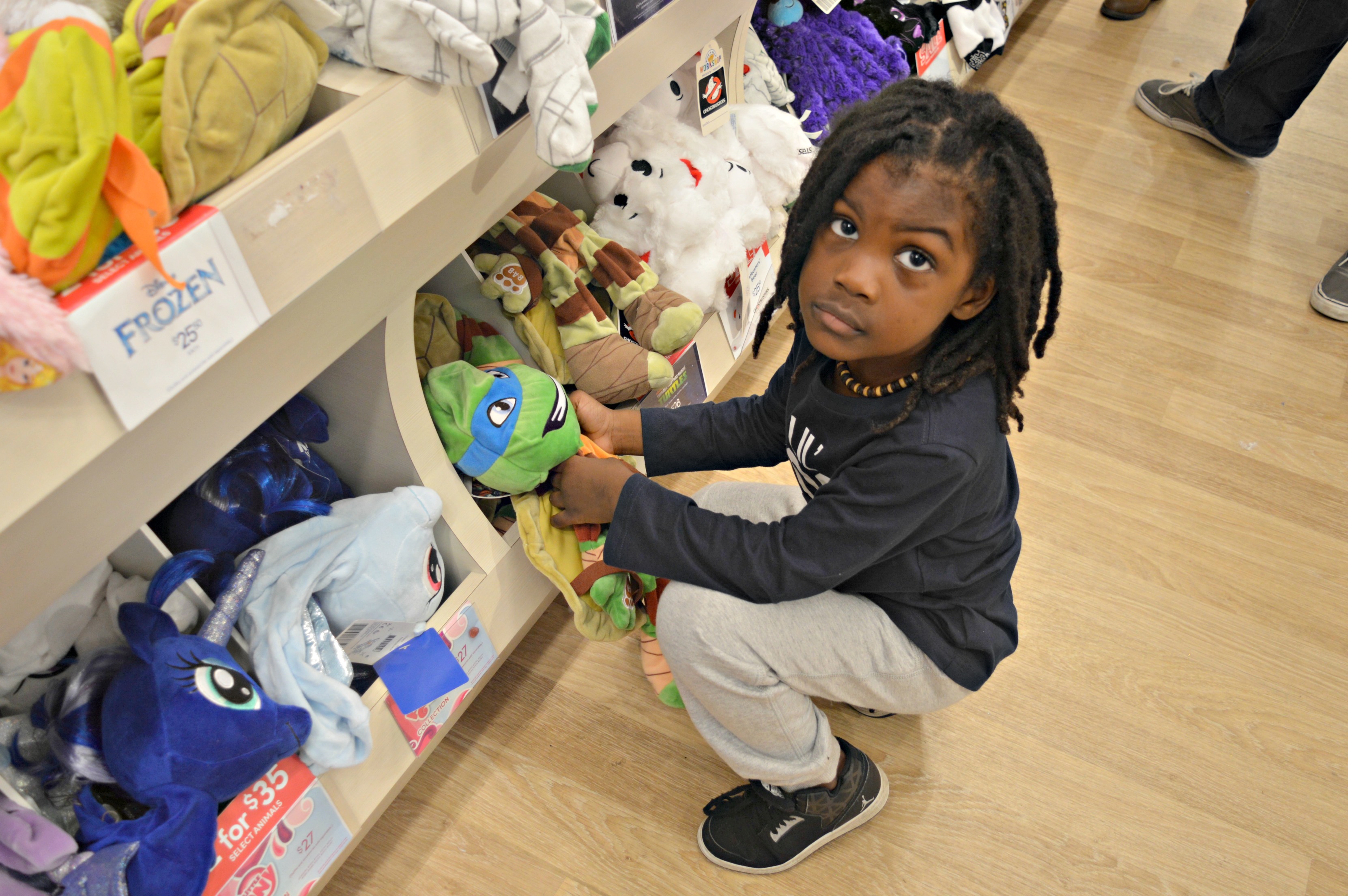 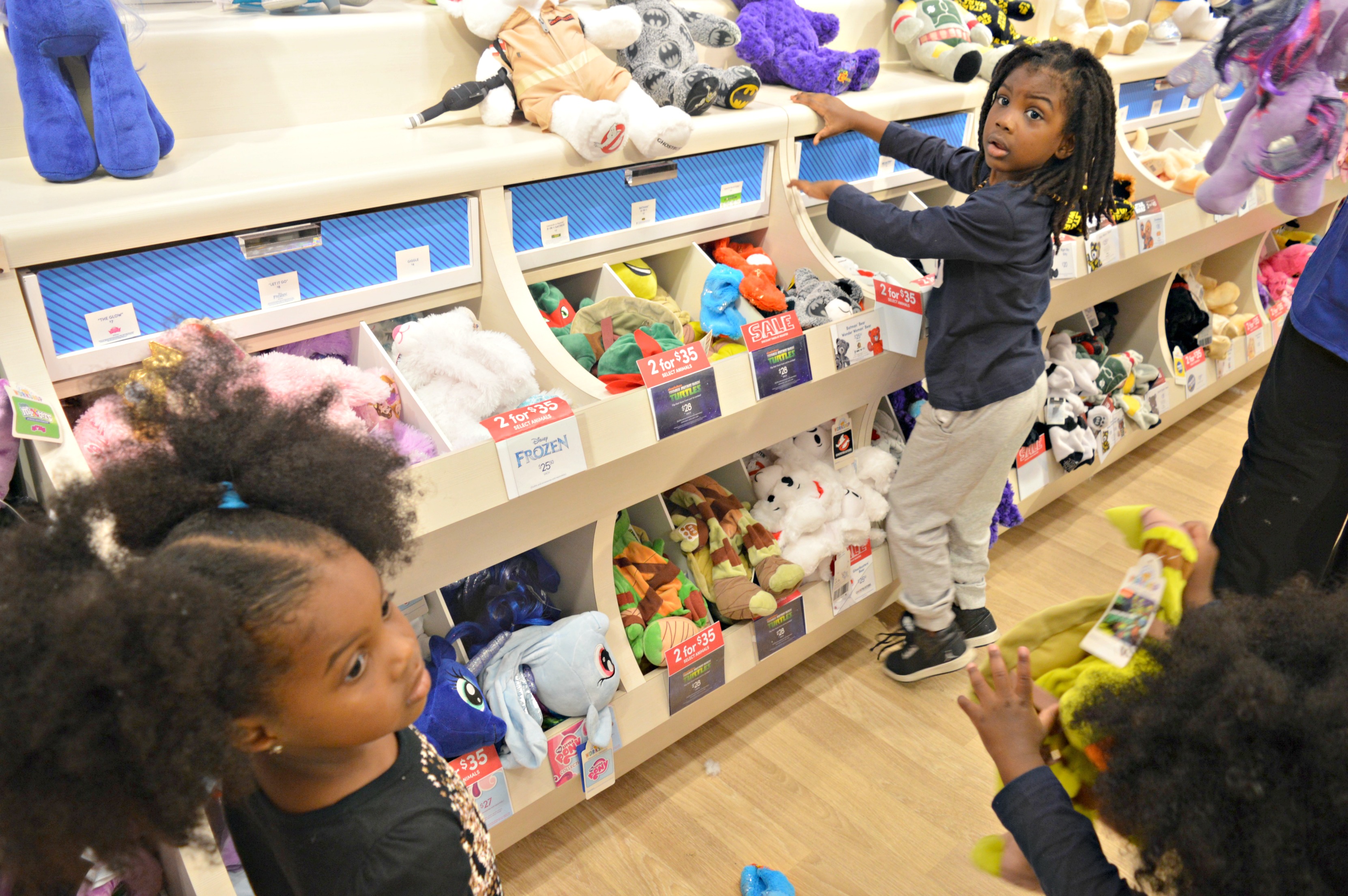 I knew when we first got there that we’d be buying skates because I couldn’t get Zan off the display bears.

After they had filled their bears with stuffing, they chose heartbeats and bubblegum scents for each one. 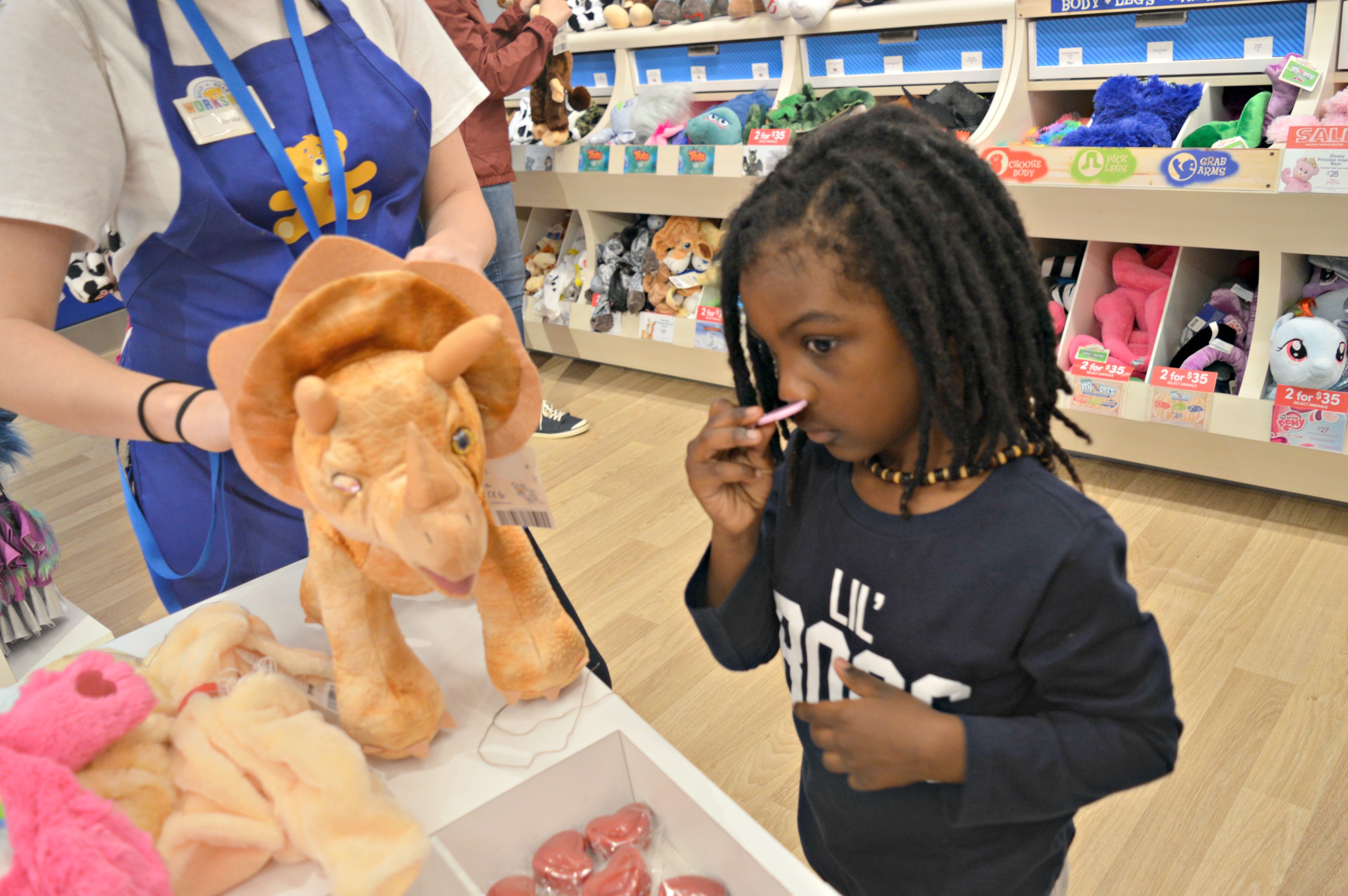 We had a hard time picking shoes for Vayda’s PonyTail because there was a ton of great choices. 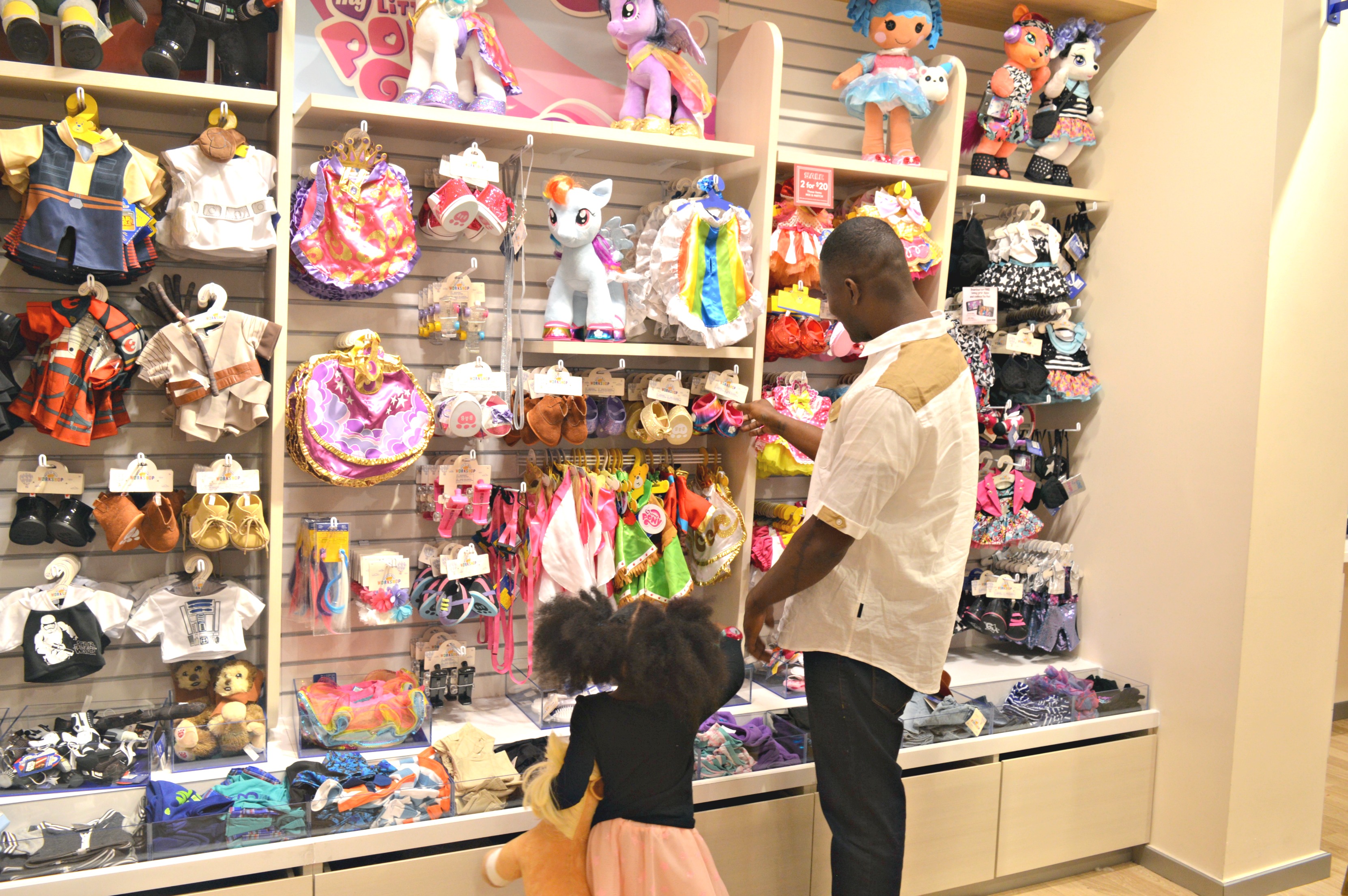 My favorite part is naming the bears because you can be as creative as you want and you get a cute Bear Certificate. You can also register your bear with the Find A Bear Program in case it’s ever lost; I love that this program is offered because we travel a lot. Now is a great time to make memories at Build-A-Bear, because the Merry Mission Collection is out and it’s incredibly cute! Build-A-Bear has over 400 stores worldwide so no matter where you are you can make memories at Build-A-Bear. 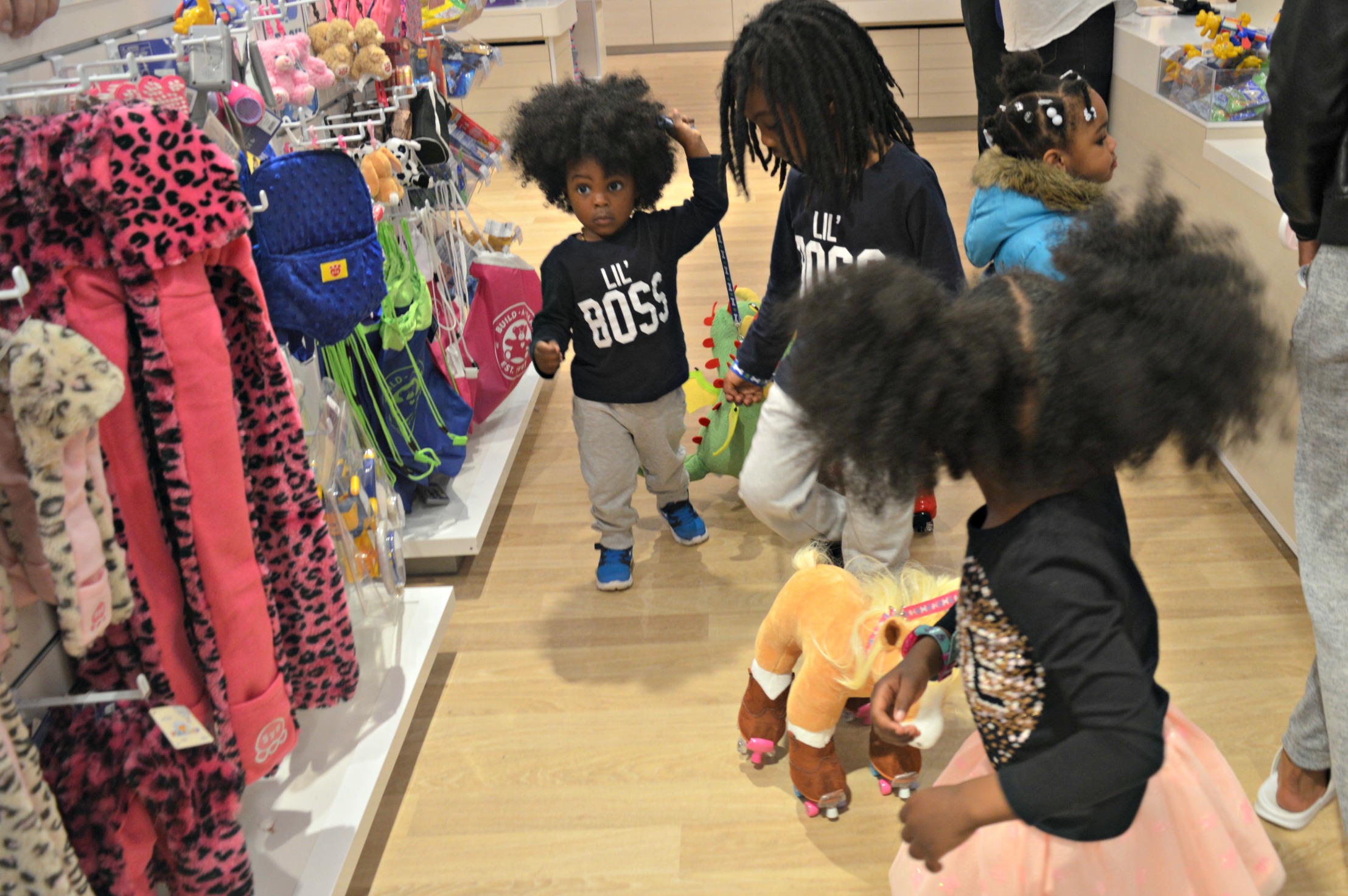 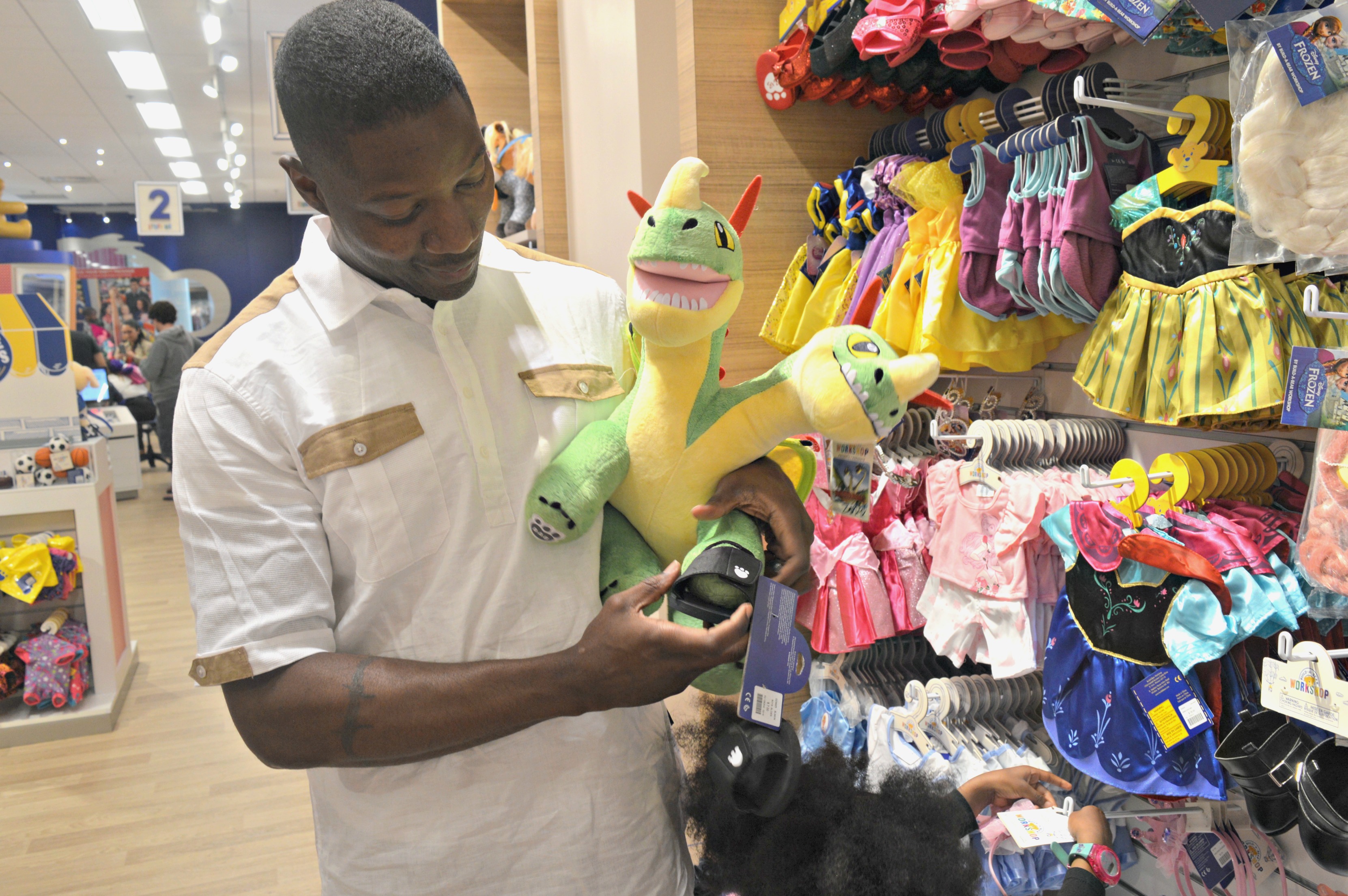